Study of Mole Astrology for Men and Women 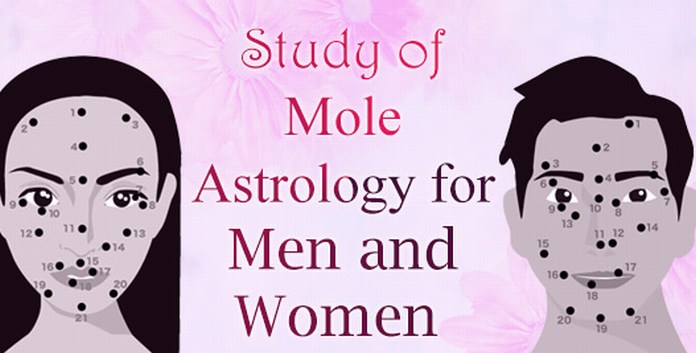 If we look at it normally then moles are nothing but simple pigmentation on the skin due to some reason. But astrologically when we study them, they all have a certain characteristic attached with them which influences our lives. Moreover, their placement has different significance based on the gender. This post studies the significance of placement of moles on different body parts for men and women. So let us explore this interesting topic to find out the science behind it based on the placement.

Women: A woman having a mole on her chest is considered very lucky.

Men: If a man has a mole on his chest then he is considered miser. He is always afraid of things which are not even related with his life.

Women: If a woman is born has a mole on her right breast then she is predicted to have many children, usually girls and leads a happy life. She is blessed with all the comforts.

Men: In case of a man, mole on right breast makes him a coward.

Women: Woman with a red colored mole on her left breast has only one but a good son in her life.

Men: Men with mole on right breast are born with a small heart.

Women: If a lady is born with a red mole on the forehead then it is considered very lucky.

Men: If a man is born with a mole on his forehead then he is a born ruler. But if the mole is one the left side of the forehead then it is not considered good as he many become the reason for the failure of the organization he leads. On the contrary, if the mole is on the right hand side then it is considered very auspicious as he is able to create a strong and successful empire.

Women: If a lady is born with a red colored mark on her left cheek then she is expected to have lots of attraction in her life. Opposite sex finds her appealing.

Men: If a man has a red colored mole on his right cheek then he loves to eat sweet dishes. He is expected to be adored by lots of beauties in his life.

Women: If a lady has a mole on her nose then she marries a man who holds a post of high reputation. She enjoys great life.

Men: If a man has a mole on his ear then he enjoys happiness in life. His first child is a baby boy.

Moles below navel are considered lucky for both men and women.

Here is a complete list of body parts of a woman’s body where having a mole is considered auspicious.

There are some positions on men’s body which bring good fortune. Here is the list of all those positions:

These are some of the differences of moles present on different locations on a woman and a man. Just because of difference in gender, the meaning and significance of a mole can vary.