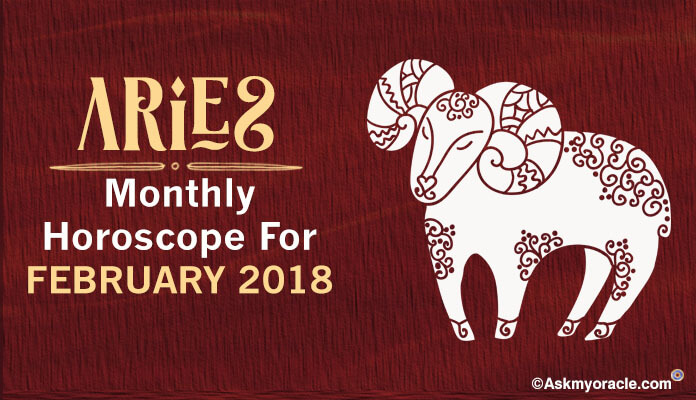 The month of February is beneficial for the Aries 2018 career and professional prospects. The Aries person would see lots of travel in career and work aspects. These travel pursuits in work would prove highly helpful for the Aries. The most favorable destination to travel for work would be South. There is also a high possibility that the Aries person might attain a good fortune in his/her profession through a lucrative favour.

Aries love horoscope predicts that the Aries person would have a good love life in the month of February. There path of love would be a clear one devoid of any misunderstanding or hardships. There will a better relationship with the loved one in February. Aries zodiac sign predicts good zodiac compatibility for singles and they have better chances of getting their love life partner. For the ones in love, they would find the intimacy with their partners increased well.

The Aries person who is in talks in relation to marriage, their talks would lead to fulfillment and marriage in the horizon. For the ones who are already married, the Aries person shouldn’t give any high hopes or promises to their spouse and regret later in not fulfilling them. The marriage relationships of the Aries would be intense and fulfilling in February and one should make sure there are no tensions or misunderstandings in the relationships. This would guarantee smoothness in their married life and happiness always.

A good health is what the Aries person would have in February. The health system would be sound and well favored during the month as the stars in the horoscope are directed favorably towards the health affairs. Any minor discomforts in health would also wear off in the month. The Aries sun sign person should take normal precautions and ensure that there are no serious implications during this month. Also, the Aries fellow should make sure to attend any minor complaint which may arise in the month.

As far education is concerned, Aries personality predicts that the technical Aries students find themselves working hard and studying hard than usual. Even the students who are pursuing dance, drama, music, painting, sculpture and fine arts, this applies the same for them too. They would study hard concentrating on their studies. The Aries stars say that the fellow should also guard themselves against a particular mental framework which might influence them to become highly self-assertive or headstrong with their teachers. Students who are looking forward to appearing for competitive examinations, they should opt for extra coaching classes, predicts Aries 2018 education horoscope and astrology.

Other Related of Aries February Horoscope