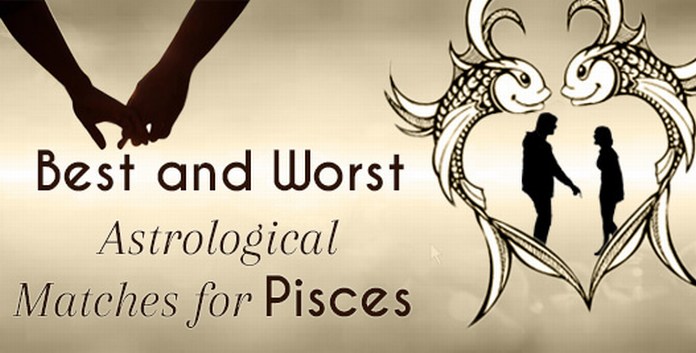 Of the 12 zodiac signs, Pisces is known to be one of the most sensitive and emotional sun sign. They are creative individuals who are born with an ability to dream. They are compassionate and intuitive as they have the potential to think out of the box. They love to stay in their world of dream. Practicality is not meant for them. Most of the people find them a little difficult to understand. They are not very keen on being a part of the limelight but they prefer keep doing their job away from the center stage.

Pisces people are very shy. They are quite and they love to introspect. They think that just keeping themselves away from the problem is going to solve their problems. They always need time for themselves. They are amazing romantic partners as they are liked by all because of their simplicity. They match well with either a water sign or an earth sign as these two elements are very compatible with Pisces sun sign.

Here are some of the most beautiful romantic associations for Pisces sun sign.

Though Capricorn and Pisces are very different from each other but then these differences make them a compatible couple as they are able to supplement each other beautifully. Capricorn is one person who is able to add a practical side to the vague vision of the fish. He is able to provide him the guidance and help him have a path to transform his dreams into reality. This makes Pisces happy which reflects in their association. Likewise Pisces fills the bond of love with passion. With equal support and love, they are able to create a beautiful romantic association which is successful in all terms.

Another sun sign with which Pisces enjoy a strong love relationship is Scorpio. The position and influence of the stars of both these signs is such that the moment they see each other, they fall in love. They don’t take time to get attracted towards each other. Scorpio is going to be the leader and Pisces would love to be taken care of by the partner. They are going to give themselves to each other. They will be loyal towards each other and will have strong feelings and emotions which will keep their relationship going till the last breathe.

Having discussed the best relationship matches, it is time to know the worst astrological matches for the fish.

Sagittarius is completely different from the fish. They are so different that there is no common point of liking. Sagittarius is an adventurous soul who loves to be free and independent and in a relationship with fish, he feels that he will have to compromise with his true self which is very suffocating for him. Pisces on the contrary is someone who desires a partner who can be true to him, who can love him, take care of him and pamper him and for sure Sagittarius is not the one who can do all of this. Sagittarius will always end up hurting the sensitive and touchy Pisces with his remarks or actions which will ruin their relationship sooner or later. Sagittarius longs for parties, social gatherings and spice in life whereas Pisces wants to keep it simple by staying home. Truly there is no match.

When Libra meets a Pisces for the first time, they both feel connected and attracted towards each other. Though the starting is very smooth and positive but later all the differences between them begin to surface because of which they end up falling apart. Sometimes the over sensitive nature of Pisces can be frustrating for the Libra. Fish loves to be home and always stay private which can again be a cause of clash between them as Libra is a social butterfly who loves to meet new people and party hard. They both will not be able to behave as expected by their partners because of which the chances of infidelity are high and eventually they will breakup.

Gemini is a freedom lover who takes life and relationship lightly. This is something which is way beyond a Pisces scope to deal with. At both the ends, the chances of infidelity are quite high as they both are going to fail to manage their relationship which will compel them to get involved in some other association. They are going to have a tough time looking for reasons to be with one another and to be able to meet the expectations of their partner.