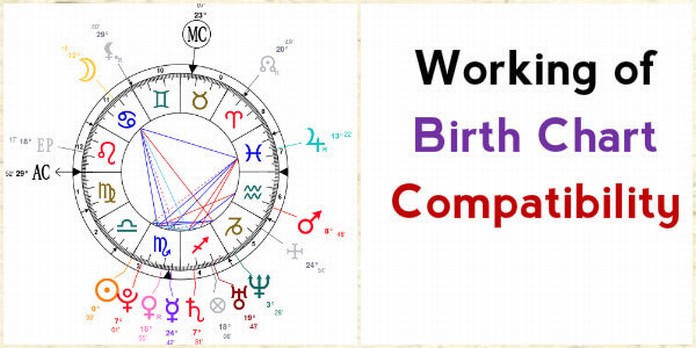 We often face similar questions haunting out heads. And one such question is that how does birth chart compatibility works? All of us think about the extent to which the predictions about relationship, happy marriage or divorce are effective based on the date of birth of a person. Are all Capricorns are attracted to Taurus sun signs? Do all Scorpions make good match with all Leos? Well obviously this is not true. These are generalized findings which do not conclude anything in particular. Hence, it is important to understand the science of birth chart compatibility and its working for better clarity and understanding.

Extent of Predictions in Astrology

A good astrologer never promises that he can make the most reliable predictions about marriage, divorce, success of relationship etc. just by knowing your sun sign. He can never make such precise forecasts based on such generalized information. The best thing that they can do is study the birth chart of the person or a couple and conclude the positives and negatives of their relationship or what is the future of that association.

Birth Chart Compatibility is a lengthy process. To make sure that the results are effective, an astrologer has to be skillful enough to analyze different variables that are involved in the process. He takes into account all the planets, all different signs, all the houses in the chart and then develops and studies the relationships between these aspects.

When we study zodiac signs, they are a handy guide to find out the best love matches. But we need to understand that sun sign is just one part of the birth chart and hence it doesn’t give a complete picture of the compatibility. To be able to make effective inferences, birth chart compatibility is important and also a complicated process. We cannot negate the fact that some sun signs have better understanding because of effective frequencies between them compared with the rest of the zodiacs. But this doesn’t mean that having a good relationship with other signs is not possible. All of this is very subjective and can only be concluded with your birth chart.

Past and Present of Birth Chart Compatibility

When we look back in history, we would find that there has been limited focus on compatibility between the zodiac signs. It was very different then compared with what we know of it today. Marriages in those times were out of convenience and people would not really consider going for love matches. Women were expected to get married to men who were selected by their parents. Astrology was used in those times as well but it was for different reasons. And this is the reason there is not much text available on compatibility between the signs.

In the era of sixties we can find the concept of birth chart compatibility surfacing. We find it emerging as an independent topic in astrological science with principles that overlap with natal and predictive astrology. We are dealing with same principles of astrology but we are studying them in different context. We have been using them in business, career and other astrological predictions for ages but now they are used frequently in studying compatibility between two individuals.

There is no scientific mechanism which can define the working of birth chart compatibility. It is like astrology which revolves around various kinds of theories. Astrologers have confessed that their experiences have proved that it works and works well. There are various theories which talk about how astrology works. They range from simple theories to little complicated ones which don’t seem so convincing. Therefore, the best way to study them is to find out about the compatibility of your own relationship.

The journey of birth chart compatibility and astrology is amazing. To experience the world of astrology, you need to explore and feel what it offers.